Docu-film on Anglo-Indians in Chennai Today 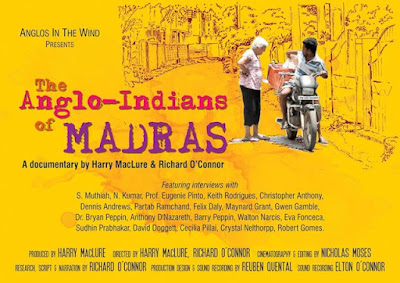 Madras Day is triggering the making of song videos and documentary films.
One film which was screened at the fag end of the Madras Week was on the Anglo-Indians in the city today.

Made by Harry Maclure who edits 'Anglos in the Wind' magazine and Customs officer Richard O'Connor, the 55-minutes long film looks at the AIs in different areas of the city - the past and the present.

Though it was a hurried assignment and could do with better filming and audio quality it is still a valuable document of the city's community.

It was screened at the Press Institute, Taramani. And this film will make a good addition to the small collection of films on Chennai/Madras.
Posted by Vincent D' Souza at 9:01 PM