As a prelude to the MADRAS DAY 2010 celebrations due in August, a screening and discussion
on Documentaries on Madras / Chennai was held on April 3, 2010 at the Alliance Franciase - Madras auditorium.

Three recently made docu films were screened on that day. 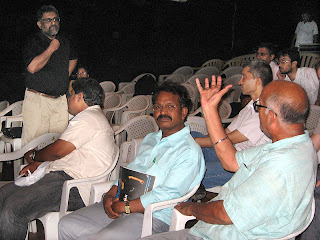 One on a Catholic Community’s Feast. The film documents a small community which settled in San Thome celebrating its traditional feast dedicated to saint Lazar, patron of the lepers in Mandavelipakkam.

A film on Kannagi Nagar made by the students of the Media department, Madras University describing the life in a sprawling colony on the southern suburbs of the city which has been promoted by the state was also part of the Docu Film festival.

Also, the 3rd film was on the Panguni Fest of Sri Kapali Temple, Mylapore where Mohan Das Vadakara records the sounds, sights and colours of this annual fest.

After the screening of the films, Vincent D' Souza, one of the anchor persons behind the Madras Day celebrations interacted with the audience and encouraged the interested people to make more documents on the city of Chennai. He offered support to the docu film makers in developing the ideas, providing possible resources and tech support.