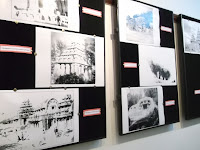 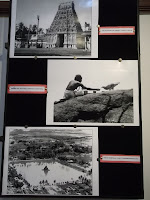 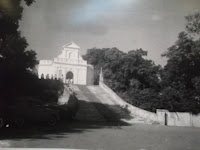 This year, she had two exhibitions running – one, a display of paintings by A. Ananda Kumar and the other, a display of some splendid photographs taken by the late M. K. Rangaswamy Aiyangar – of Madras and its environment in the beginning of the last century.

Let’s look at Aiyangar’s pictures first. M. K. Rangaswamy Aiyangar was a prolific writer and photographer. Born in 1886 in Srivilliputhur, he was a scholar of art, culture, religion and music, having written many articles on the subjects in leading dailies like The Hindu, Indian Express and the weeklies and magazines of his times. He authored several books, among which Thyagaraja Thatvam and Mahabalipuram – A Guide Book with illustrations of photographs taken by him are noteworthy.

Aiyangar was an eminent photographer and, according to Nanditha, will be remembered for his famous photographs of the early 20th century Madras and Tamil Nadu, especially the temples. Tirumala to Tillai, his famous exhibition of pictures, was held in Madras, Tirunelveli and Kalahasti in Andhra Pradesh.

Aiyangar’s son, the late R. Madhavan, who retired from The Hindu, gifted his father’s collection of negatives and prints to the C. P. Ramaswami Aiyar Foundation library.

Here are a few of Rangaswamy Aiyangar’s pictures: a long-shot view of some of the pictures of monuments, of the Sri Thyagarajar Temple in Thiruvottriyur, of a person feeding vultures in Thirukkalukundram, of the Sangu Thirtham Tank there, and of the St Thomas Church on the Little Mount.