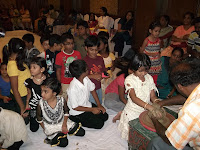 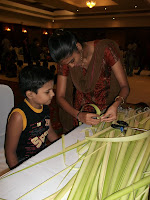 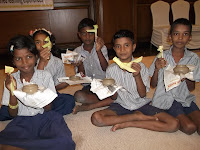 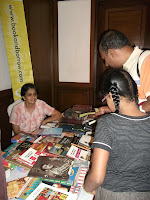 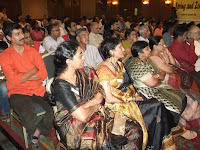 Whether Madras Week celebrations received overwhelming or muted response this year, activities at Hotel Green Park, Vadapalani, went on an even keel and the response, like in previous years, was quite overwhelming and encouraging. There were quite a few who had travelled long distances to reach the venue and it was only after the clock struck eight that some began to slowly wend their way back home.

As usual it was the programme for children that set the tone for the evening. When Binita and Shrimati of Spring into Reading set about the task a few years ago, organising events for children during Madras Week, little would they have imagined the kind of response the events would generate. When Gargi of Zoom Kids joined this year, the three, under the Spring and Zoom (an activity centre for children) banner, made the most of an afternoon, welcoming children to experiment and create products using the potter’s wheel and palm leaves. Supported by resource persons from DakshinaChitra, ‘Madras – experience your cultural heritage’ was open to children five years and above.

Later, there was a peppy demonstration by the students, of ‘Madras: Then and now’, complete with song, dance and theatre, touching upon aspects such as traditional games and how children spend their time today compared to those in the past.

For Chithra Madhavan, Hotel Green Park is almost home. She has lectured here on two previous occasions. This year, she chose to make a presentation on ‘Lesser known temples of Chennai – some more’. As usual, hers was a thoroughly researched presentation, pleasing to the ear and easy on the eye. It’s indeed a shame that many of our old temples remain neglected with inscriptions scraped away and gaudy paint plastered over. Chithra points this out time and again, which only shows that it must be the same story in many temples and how it has impacted a lover of heritage like her.

Incidentally, Chithra completed her M.A. and M. Phil. from the Department of Indian History, University of Madras and her Ph.D. from the Department of Ancient History and Archaeology, University of Mysore. She has published five books - History and Culture of Tamil Nadu (in two volumes) and Vishnu Temples of South India (in three volumes). She has also co-edited a book South India Heritage which contains 500 articles on various aspects of South India’s heritage and culture.

Pradeep Chakravarthy made quite an interesting presentation, on how ‘Kodambakkam (Puliyur) was the centre of Madras’. He took a look at how Madras was organised geographically in the 9th-12th centuries, what some troublesome local governance issues were and how they were resolved. There is very little about Puliyur in the public domain and based on what Pradeep explained, there is a whole world out there that needs to be researched. It only shows how little we know about our own local history. Pradeep’s attempt I thought was remarkable simply because there is so little material to base a presentation like his on. I would urge him to conduct research himself, if he can. That might form the background to an interesting book.

Pradeep has two books to his credit – on Thanjavur and the Vahanas. A student of KFI and a graduate from Madras Christian College, Jawaharlal Nehru University and the London School of Economics, he is an executive coach for senior leaders in Infosys Technologies. His articles appear frequently in The Hindu and Business Line.

Pictures show some children waiting expectantly as a little girl gets her fingers thoroughly soiled on the potter’s wheel; a resource person from DakshinaChitra showing a boy how he can be creative with palm leaves; children from the local Corporation school show off their exhibits; a father and daughter look for something interesting to read as Malavika from Book and Borrow looks on; and a packed hall at Green Park.

Nice blog. Quite informative though! My best wishes! Keep posting! :-)